My wife, son, and I are currently serving the Lord as church planting missionaries to South Africa. Our hearts’ desire is to reach, train, and encourage folks all over the world to accept Jesus Christ as their personal Savior, and train others to do the same. 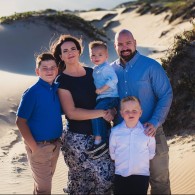 “Ready for Either” Our Generation Camp Review

“I’ll live or die for Jesus Christ, here’s my life, I’m ready for either!” I am so excited about the moving of God on a group of young people last week during the Our Generation Camp. Several young folks made decisions that their life is no longer their own, and that they would surrender to […]

Just a quick update to share some of the exciting things God is doing in our life and ministry… 1) We have been notified of two new supporting churches so far this month! We praise God for His faithfulness to supply our need. We are trusting Him to continue to do mighty things this year! […]

Snow Snow Snow! Greetings from Wisconsin! We began the month of February with several meetings in Wisconsin and have really enjoyed seeing how God is using these pastors in some cities where they are the ONLY Independent Baptist Church! It has been a humbling reminder that there is yet many areas within our borders that still need church […]

It has been a very exciting first month of the New Year! God is continuing to bless our efforts to reach South Africa. Already this month, we have been notified by pastors of four different churches that we are their newest missionaries for 2015! I am so grateful for the Lord’s provision and am amazed […]

Out with the Old, In with the New!

All I Want For Christmas…Is JESUS!!!

Nintendo Super Mario Bros. / Duck Hunt A Bicycle Baseball Glove Teenage Mutant Ninja Turtles action figures Listed above is my Christmas list from when I was ten years old! I remember that Christmas as if it were yesterday. I woke up about 3am Christmas Day and was heartbroken because I thought Santa had forgotten […]

Learning to Smoke a Turkey

Three weeks ago, I received a phone call from my brother that impacted my family for the rest of our lives. As many of you know, my dad passed away in his sleep from a heart attack just two weeks after his 54th birthday. The last few weeks have had certain challenges that are familiar […]

It is with great sadness that I write this month’s prayer letter. On October 31, 2014, as my family and I were settling into our hotel room after the first night of a mission’s conference; my dad was also settling into bed for the night. The next morning, as we were getting ready for the […]

“Life is not fair!” As a child growing up, this was probably the most irritating statement I heard on a regular basis! Your little brother gets a toy, and you don’t. (Even though it is his birthday!) You look at your mom and say, “that’s not fair!” She glares back at you and says, “Life […]

October 18, 2014 Written by The Underwoods Uncategorized